Ever since I was introduced to squash at 5 years old by my dad, I immediately took a liking to the sport and fell in love playing. My dad was a social squash player, and I would always tag along whenever he was playing with his friends. I always looked forward to the evenings after school knowing that I would be able to play squash.

My dad registered me to a state squash association when I was 7 years old and that was when I started learning squash properly. I started playing tournaments around Malaysia at 8 years old, travelling around the country to compete.

With players like Nicol David, Ong Beng Hee and Azlan Iskandar playing at their peak for Malaysia during those periods, I was inspired to compete at the international level for Malaysia. I first represented my country when I was 9 and continued throughout my junior career, winning 3 British Junior Opens and the 2016 World Junior Championship along the way.

I then had to decide between going pro or furthering my tertiary studies but with the Commonwealth Games and Asian Games being held in 2018, I ultimately decided to go pro and focus on doing well for the country. The decision to go pro paid off as I was able to clinch the winning point for Malaysia in the Asian Games team finals and bring back the gold medal.

Squash is such a unique game in my eyes, to do well you have to be strong in all areas including physically, mentally, and tactically. I love that there are so many ways that you can approach the game too, you can win by playing the style that you want. You can win by being fitter than your opponent or you can beat them with a better gameplan.

There is no one way to be a good squash player and this is what I love about the sport.

Squash has given me a lot and continues to give me opportunities to maximise my potential. With the support of everyone, I will continue to work hard and aim to reach the top.

As mentioned earlier, winning the Asian Games Team Gold medal in 2018 would be one of my biggest achievement thus far. Knowing that the whole country was counting on me and supporting me was a feeling second to none.

Winning the World Juniors in 2016 was a major achievement for me as well. I trained so hard throughout my junior career to win that title. When I won it, I went into a state of disbelief and just broke down into tears while hugging my coach. The World Junior title was very special to me. 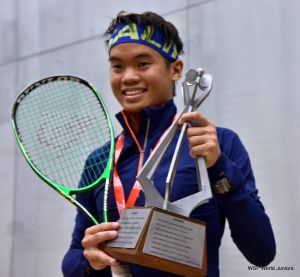 Besides that, winning my biggest professional title Malaysian Open in 2019 in front of my family and friends was one of my best wins too. I have fond memories of playing at home and I really hope that Malaysia will host big events again in the future!

I like to have a very set routine for my training, so I always try to follow a similar schedule every week. I will always have at least one squash session a day and mix the other session up with either a strength or fitness session. I also do a lot of stretching daily to keep myself flexible and injury free which is very important. When preparing for an event, the squash sessions ramp up even more, and the overall training will be very squash specific. During tournaments, I am normally quite relaxed and focused. Mostly going for a short hit in the morning before the match and just preparing myself mentally for the match after the hit.

I always make sure to stay connected with my friends and family when I am travelling on tour. They keep me sane in a lot of situations when I am flying week in week out! I also enjoy reading a lot of books when I am travelling to expand my knowledge. When I am at home, I enjoy playing video games to wind down and take my mind off from squash!

Always enjoy the game! It is important to remember the main reason you started playing squash, and for me that was enjoying the game and having fun! If you love the game, then you will naturally develop a tendency to be better and have the passion to improve. It is very hard to keep playing if you stop enjoying the game, it will start to feel like a hassle and motivation will be low.

The love for the game should always be there!

Aside from that, working hard is important too. Working hard not only in terms of physically but all aspects of the game. You will have to work hard on learning the nuances of the game and developing a better tactical game plan, work hard on improving your mental toughness. I always believe that “hard work beats talent when talent doesn’t work hard”. 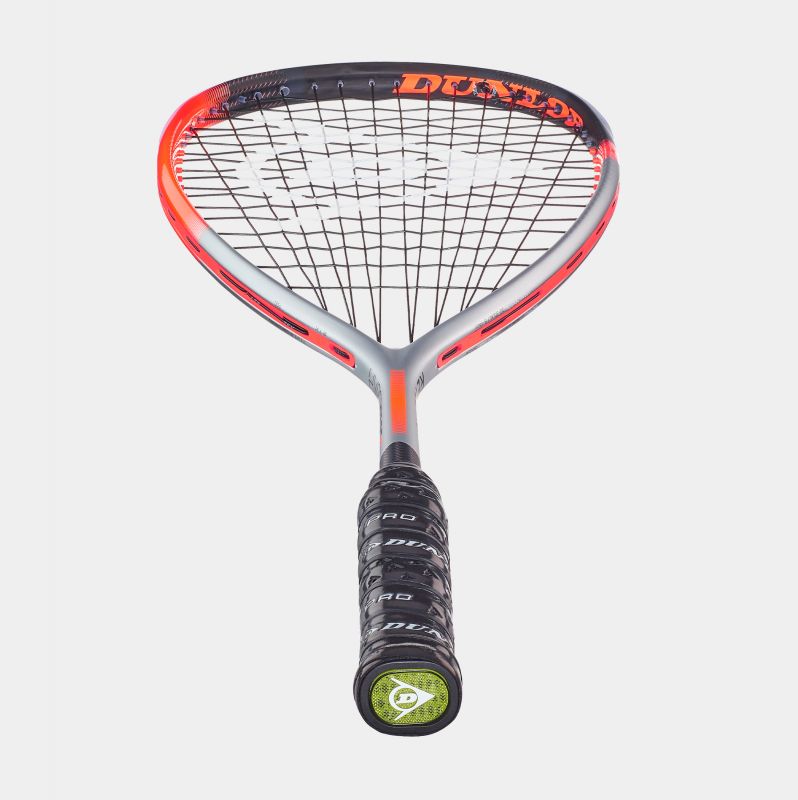 Packs more power thanks to the mix of a larger head, thicker aero beam and the 14x18 Powermax string pattern. The most powerful Hyperfibre XT racket.

Dunlop pro players may play with different rackets to the model shown.