Maybe it seems simple but it’s not often we talk about the basics of a Tennis racket. What are the key parts of the racket and why are they important? Well sit back and relax while we break it down for you into nice tasty little chunks.

The grip is where you are supposed to hold the tennis racket when playing, you’ll find it much easier if you do. The grips can come in different sizes, it actually comes in 1-6 despite Olivier, in the video, only counting up to 4. The grip size that is going to be best for you obviously depends on the size of your hands but a top tip is that when you have the racket in hand, you should have a small gap between your palm and your fingers, so you should be able to get your small finger nestled cozily into that gap. Everyone has their personal preferences, but Olivier, our resident professional stringer and all round Tennis information hub, suggests that if you fall between two grip sizes, your best bet is to go for the smaller size. This allows you to know you’ll be able to grip the racket better and you can always pump it up with a juicy over grip if you feel you made a mistake.

One major thing you will notice is the large oval like thing making up the majority of the racket (where all the strings are). This is referred to as the racket head and racket head size can make a big difference to the playability of the tennis racket. Basically, the smaller the head size, the more control the racket is likely to give you, the bigger the head size, the more power. There are plenty of other factors to consider here but this is one of the key things to know when thinking about what type of racket you are going to use. We’ll cover the differences between power, control and other racket types like spin in other posts but for now, just be aware, that there are plus points and negative points to the different head sizes and they generally come into play based on the way you play.

When we talk about balance, we are talking mainly about a racket being head heavy or head light. Similar to head size, as you may be able to imagine, the more head light it is (likely because the head size is smaller) the more control you will have over the racket. While that sounds good, if the racket is a bit more head heavy, it means you can generate a bit more power with a little less effort. Again, this then boils down to a personal choice based on an individuals game style.

Stiffness of the racket is basically how much flex there is in when hitting the ball. Don’t worry it doesn’t really range from rock solid, to as floppy as a piece of paper, but the subtle difference can help with the control of the racket and it’s overall comfort in a players hand. Stiffness is measured in RA which usually sits between around 50/55 – 70/75 with the lower number offering a more flexible racket and the higher number a less flexible racket. The lower number will also offer you more control and a bit more comfort whereas the higher number is going to offer you more power. Think about it like a tennis ball bouncing off of a hard brick wall vs a wall that has some very slight padding on it for example, the ball will rebound off the hard brick wall much faster. There are some things to consider, as Olivier mentioned, like the comfort and the damage a stiff racket can do to your arm, but this is something that all elements of the racket can help or hinder you with. 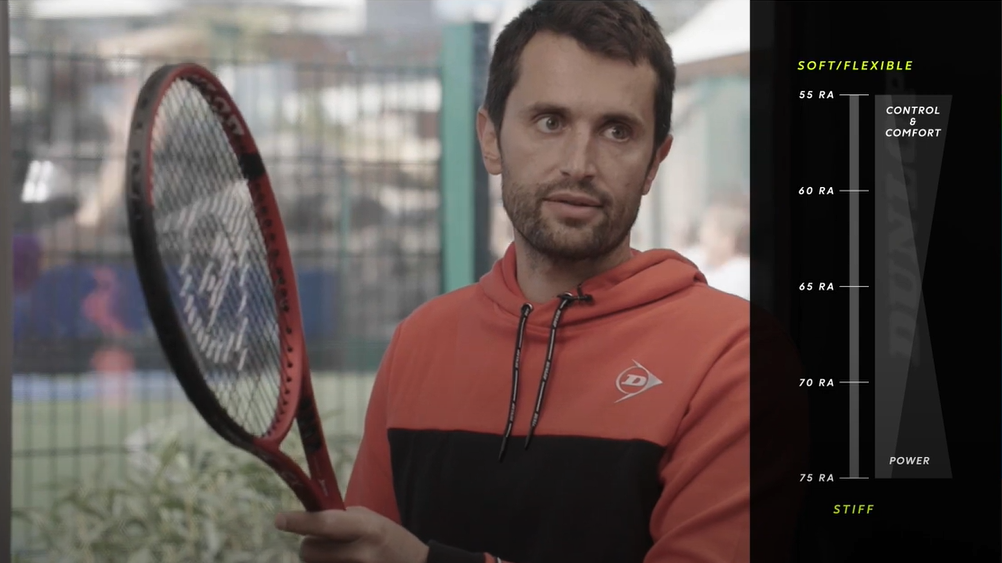 Then of course we have the strings. A very important part of the racket, and certainly something we will touch upon in other videos, string patterns on rackets generally come in two forms – 16×9 or 18×20 but to be honest it’s mainly 16×19. In the Dunlop series of rackets, it’s only the CX 200 Tour 18×20 (used by Kevin Anderson) that uses the 18×20 string pattern. If your wondering what these numbers mean, quite simply, it’s 16 strings down and 19 strings across, or of course 18.. 20.. you get it. 16×19 is pretty well established but going to an 18×20 just levels up that control again by creating a denser string pattern that allows less power out of the shot but a much better level of control on it.

In conclusion. There is plenty to consider when looking to buy or use a Tennis racket and most rackets will fit certain formulas, i.e. you can’t customize every single element mentioned above, unless you want to manufacture your own racket (we don’t recommend) as having an 18×20 string pattern on a massive head size racket, that is really flexible but also somehow head light, just isn’t feasible and frankly doesn’t make any sense. But it’s important to have an understanding of some of the different ways in which racket features are characterized and measured so you can begin to figure out what you are looking for when trying to find the perfect racket for you.